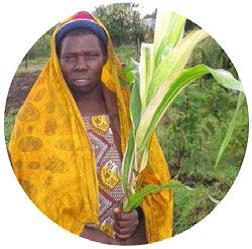 How can MLN be controlled?

Based on CLN/MLN management experiences in the USA, rigorous disease management practices in seed production plots, including use of resistant varieties, controlling weeds/alternate hosts, keeping unnecessary machines/people out of the field, controlling insect-vectors using appropriate insecticide (at weekly intervals), and having adequate isolation from MLN-infected fields, can prevent the spread of the disease. Because individual plants with MCMV or SCMV alone show milder symptoms, seed production fields must be carefully inspected and plants that appear infected removed immediately.

How can farmers prevent MLN in their fields?

What should farmers do if they find MLN in their fields?