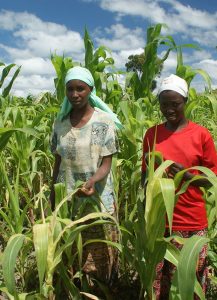 Maize Lethal Necrosis (MLN), or Corn Lethal Necrosis (CLN) as it is known in the USA, has been reported since the early 1970’s. First reports were from the Americas – Peru in 1973, followed by Kansas, USA in 1976. Subsequent reports have come from other Latin American countries – Argentina (1982, Brazil (1983) and Mexico (1987), and it is also reported from Hawaii in 1991. More recently MLN has been reported from China in 2011. 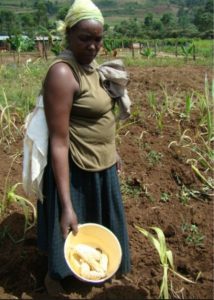 Potyviruses are widespread in Africa, but MCMV was only first detected in 2011. Synergistic effects and MLN symptoms were first recorded in Bomet district, Kenya in September 2011. A severe outbreak of MLN in the Rift Valley of Kenya occurred in 2011/12. MLN has subsequently spread rapidly, being recorded in almost all maize growing districts of Kenya since 2012.

Rapid spread to neighbouring countries in East Africa has subsequently occurred. MLN has now been reported from: Uganda, Tanzania, & South Sudan in 2012; Rwanda & DRC in 2013; and Ethiopia in 2014.

Given the major threat to maize production in Africa from MLN a series of initiatives are being undertaken to address this serious issue. These include: a large-scale dedicated MLN screening facility established by KALRO and CIMMYT at Naivasha in Kenya; a fast-track breeding program being implemented by CIMMYT and national partners that is already delivering new resistant varieties; controlling the spread of MLN through improved diagnostics, surveillance and MCMV-free commercial seed production; and an in-depth study into the epidemiology and transmission mechanisms of MCMV.